Holy cow! Just returned home from the s.Oliver Arena and I am completely overwhelmed from the game I just saw.  Who were those guys in the white jerseys today and what have they done  to  the guys that lost to Trier just four days ago? I am sure that only the most optimistic among the Wuerzburg fans had a victory in mind before the game started. As I stated in my last blogpost I too expected a loss and right before tipoff, I thought that losing with a difference of less than 20 points could be considered a success for this Baskets team. But our fantastic team did not only surprise me with that incredible 89:82 win over Valencia Basket Club, a club that just recently beat FC Barcelona in the Spanish ACB. That way it does not feel bad to have been wrong.
The atmosphere in the arena tonight was the best and loudest this season so far, who would have guessed after that disappointing loss on Saturday?
The defensive effort was really good again, but in this game the Baskets finally showed again how good they can be on the offensive end. Especially McKinney and Anderson carried a lot of the offensive load with 21 and 17 points. All in all the Baskets were excellent from three point range, making 13 of 23 attempts. Every Baskets player who saw playing time scored, even Brazzo Henneberger made his first three point shot. His second try was an airball way off the mark, making him grin while running back into his defensive position. A special mentioning goes out to Oli Clay, our third string center who sees so many minutes because of McNaughton's injury and who many Baskets fans already have written off, because of several unsatisfying performances. Today he made 11 points, including 5 of 5 from the free throw line, probably his best game this season and hopefully it can push his confidence for the oncoming games and the remaining season. After all there was not one Wuerzburg player who did a bad job tonight, Stuckey had two wild turnovers, but made up for it by hitting two threes from the corner. A big highlight certainly was Little's alley-hoop.
Valencia on the other hand seemed really impressed from the crowd especially after the more than 3000 Wuerzburg fans expressed their displeasure with the referees in the first 6 minutes of the game, where they missed several obvious calls against the Spanish team. After the heavy booing from the stands ( a seldom occasion where I joined in), the officiating finally became better. Valencia's players continued to do their best to fool the refs by falling to the floor all too easily after normal body contact ( NBA flopping rule anyone?) I always thought that only soccer players from southern Europe would do that, now I know basketball players can do that as well.
After all it was a historic win for the club, for the team and also for the fans and it was also a display of the true capabilities of these players and coaching staff. I really hope that the Baskets can carry that momentum into the league and win in Frankfurt. 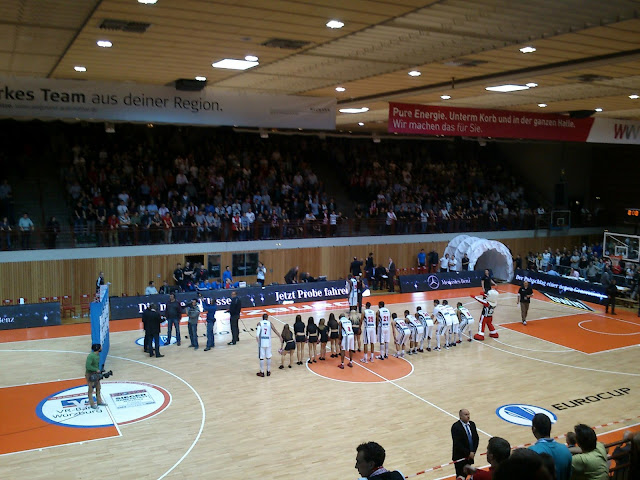